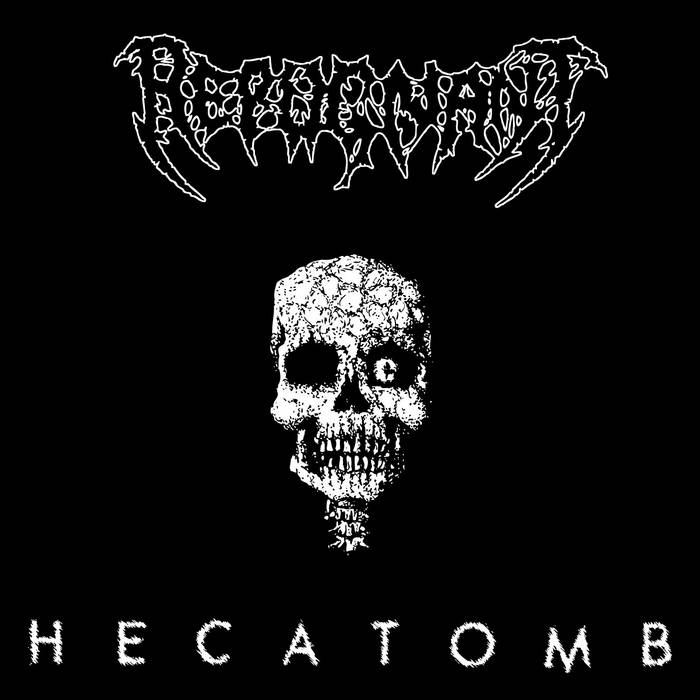 Jamie Marshall Rock-solid old-school death metal filtered through a 90s Swedish lens, to incredible effect. This is some of the most potent death metal I've ever heard. I wonder what the singer's up to now? Favorite track: Rapturous Genocide.

Matthew Toye One of my favourite death metal releases. There's a little bit of guitar wizardry but it fits and isn't overdone. Outstanding in many ways and that Celtic Frost cover is a must hear. Favorite track: Rapturous Genocide.

Fernando A celtic frost cover is like microwaving a chocolate cookie for five seconds. You don't really need it, you were going to consume it anyway, but it is so much better. Favorite track: The Usurper.

“Putrid odours rising, From beneath the ground. They climb up from the tombs with a freezing horrid sound... From beyond the grave”

This one sentence perfectly sums up the atmosphere of “Hecatomb”, the legendary EP from the Swedish Repugnant. In fact they resurrected old school death metal with such a quality that often it’s better than the originals! Mind that no one else, except Repugnant even thought about something like this at this time of late 90’s / early 00’s, while nowadays there are dozens of bands, that try to play like this!

“Hecatomb” was originally released as a 7”EP by To the Death Records in 1999, but re-released by Hammerheart, and also it includes a bonus track. It sounds amazing and the whole layout is also brilliant.

Everything starts with a creepy, horror intro, which is followed by “From Beyond the Grave” - this one song is just a death metal masterpiece, so amazing that I could kill for it! The riffing in it is just excellent, very sharp and aggressive, combining the very old school death and thrash metal traditions of bands like Possessed, Mantas / Death, Master, old Sepultura, Nihilist, etc. In fact this song not only will force you into maniacal headbanging, with the fast and relentless playing, but also will make you scream the catchy chorus part - “from beyond the graaaveee!”. “Morbid Ways” then strikes with something very similar, but maybe even more in the classic Swedish death metal vein, but man... It’s another amazing song, with some truly vicious and devastating riffs. “Rapturous Genocide” is a demo track, re-recorded for this EP and maybe it’s not as great as the first two songs, but anyway I wish everyone to compose such “less interesting” (hehe) songs, as still it captures the rotten atmosphere and brutal old school death / thrash metal energy in an excellent way, at some parts speeding up very dangerously, into almost grinding blasts “Genocideeee!”). Finally the whole EP is closed by Celtic Frost’s “The Usurper” and trust me, sometimes I wonder which version I like more - Repugnant’s or the original? “Day of the human holocaust, in sinners mind, forever lost. Raping the grace, human quiescence. Morbid Ways...”